The Long and Winding Road... to the Royal Highland Centre!

Well, just as I started this blog in earnest, life got extremely busy! Last Wednesday I hoped to write a post on the train from London to Perthshire, but other pressing matters arose, mainly last minute practical changes to the itinerary of our mini-Scottish tour – and I was, for my sins, tour organiser! All was well in the end, and I write this from the car on the long drive home after three fantastic concerts with my brilliant friends and colleagues at Ensemble Hesperi. More on that later this week.

So, let’s start at the very beginning. My PhD thesis explores Scottish musicians and Scottish musical culture London between 1740 and 1815. As a Scot working in London myself, I am fascinated by the fact that so many musical Scots spent decades in London furthering their careers, and in many cases, used their musical heritage to make names for themselves in a highly competitive urban environment. Scottish music was extremely popular in London’s fashionable drawing rooms later in the century: song collections, instrumental arrangements of traditional Scots tunes, and ‘Scotch songs’ of slightly more dubious origin all circulated freely. Yet, somewhat paradoxically, Scots themselves faced a certain amount of what is often labelled “Scotophobia” during this period, particularly around the time of the Great Jacobite Rebellion in 1745 and later in the 1760s, when John Stuart, the 3rd Earl of Bute was George III’s closest political advisers. More generally, though, Scots in London were often seen as being “on the make”, a criticism which contains a kernel of truth – for Scots were statistically very successful in high-ranking careers, and particularly influential in London’s nascent banking sector. Yet, often, Scots tried to lose their accents when they moved south, and identity appears to have been fluid – in other words, there were probably many different ways to be a Scot in eighteenth-century London.

In my thesis, I want to find out where Scottish music fits into this complex cultural and socio-political network. For music, after all, is close to the heart, often connecting us to our homes. Did Scots making their new home in London leave their musical past behind them, or carry it with them, sharing it with other Scots they met along the way? In order to explore this question, I look at London’s Scottish music ‘scene’ from several different perspectives – of musicians, music publishers, worshippers in London’s Scottish churches, women in the home and on the dance-floor, and many more.  At the moment, I’m finishing off the last chapter of my thesis (I’m not writing them in order!), which explores the role of the Highland Society of London in the development of Scottish musicians in late eighteenth-century London. At this point, Highland Societies were popping up both in Scottish cities (to which Highlanders had moved for work), and worldwide in areas where Scots were active in their numbers – for example, Madras (modern-day Chennai) and Cape Town. The Highland Society of London (HSL), established in 1778, was extremely influential in furthering the fortunes of Highlands, though albeit at a distance. Most notably, the society procured the repeal of the of the Disarming Act passed after the Rising in 1745, and secured the restoration of forfeited Highland Estates from 1784. Most famously, the society was instrumental in arranging the publication of the controversial Poems of Ossian in 1807, and still works to promote the traditions and culture of the Highlands today. 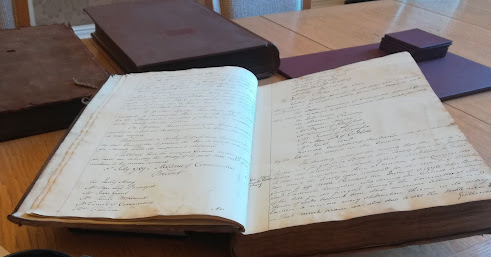 Though the historical achievements of the HSL are undoubtedly impressive, my focus has been on the society’s activities in London and its attitude to Scottish music and musicians. Last year, I visited the National Library of Scotland in Edinburgh, home to the HSL’s archive, where I found huge amounts of material relating to the musicians who played for the society’s regular meetings and annual dinners. I was intrigued by the fact that the society sponsored a Piping Competition from 1781 until the mid nineteenth century. I wanted to pin down the role of the HSL in the competition’s early history, and so I decided to consult the records of the Highland Society of Scotland (HSS), who were responsible for organising the practical side of the competition. The HSS is now the Royal Highland Agricultural Society of Scotland (RHASS), and supports the best standards in agriculture, forestry and stewardship to preserve the heritage of rural Scotland. 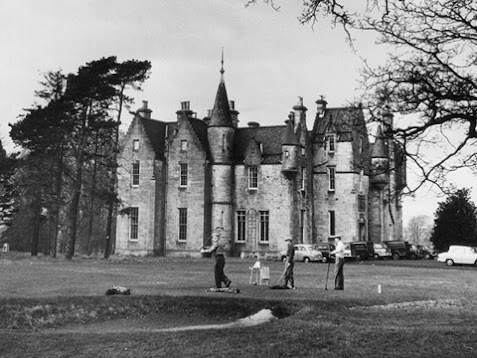 So, in search of the RHASS archive, I travelled to Edinburgh by train, then took a bus, and finally enjoyed a windy walk to Ingliston House, a historic 19th-century manor house in the Royal Highland Centre – itself home to the famous Royal Highland Show. To be honest, just the travel itself was exciting. As I started my PhD in 2019, a great deal of my primary research has been conducted online, and it still feels such a treat to be able to visit an archive or library in person. After a truly fascinating tour of Ingliston house by the kind archivist, I settled down to the take notes on the Sederunt books (minute-books) of the Highland Society of Scotland from around 1780. I had quite a bit to get through in just a day, and fortunately, the handwriting of most of the clerks was excellent. Eighteenth-century hands can be absolutely exquisite, but this isn’t always the case. Some inks are as clear as if they were written yesterday, but others fade so that they are barely distinguishable from the cream of the page itself. I was lucky, and most of the time I was able to scan each page for relevant content as easily as if it were modern type. Being able to do this is crucial for the researcher in a hurry: in this case, (and this is often the case) the content focused on a large number of topics, and references to music were few and far between. Scan too slowly, and you don’t cover all the material; scan too fast and you might miss something important!

Having limited time in an archive certainly can be a little stressful, but it is ultimately much more rewarding than the digital equivalent.  Opening a PDF on your laptop doesn’t in any sense match the multi-sensory experience of consulting a 250-year old document, touching it, smelling it. Just living with something so old even for a short period of time really brings the stories within it to life; everything seems more real somehow. I was delighted to discover that the Highland Society of Scotland treated its pipers well.  When John MacArthur, the society’s first piper, died, he left a widow ‘with five Infant Children and without any means of Subsistence except a few Articles of Furniture, of small value’, and she petitioned the society for financial support. The HSS immediately agreed that Mrs MacArthur would receive her husband’s salary for a year, and when, shortly afterwards, the society purchased a Hall, the members voted by a ‘great majority’ that Mrs MacArthur should be offered the job as Hall keeper. This job she undertook diligently until she also passed away only a few years later, and her children were left orphans. As Mrs MacArthur had died ‘in the service of this Society’ and ‘her husband’s Conduct was much approved of while an officer of this Society since its institution’, the committee readily gave further financial to support the MacArthur children and to defray the funeral expenses. The society really looked after its own, and clearly valued a woman’s contribution alongside that of her husband.

Now, a great deal of the material in the HSS minute-book relates to agricultural matters, most of which look absolutely fascinating, but which I sadly had to skim past. However, I couldn’t help but inwardly giggle when I noticed a margin note relating to ‘Destruction of the Caterpillar’! Upon reading further, it transpired that a Mr Henderson had come up with a new method for removing caterpillar infestations from gooseberry bushes, which appears to have involved alcohol, killing them in minutes before the very eyes of committee members!